I have come to Bedford to visit my sister, and she has bought pimientos de Padron for me to prepare! I am very excited! It is quite unusual to find these peppers outside of Spain. Basically, in my experience, eating these is a bit like playing Russian roulette. Some of these beautiful green peppers are so sweet they will make you melt, and others are super hot and will have you running for a cold beer (which, incidentally, doesn't help). As the Galicians say: Os pementos de Padrón, uns pican e outros non" . The peppers of Padron, some are hot, some are not. Fairly self- explanatory really! 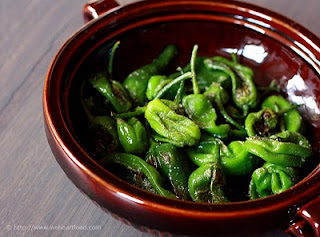 I learnt about pimientos de Padron whilst living in Salamanca, in a bar very near the beautiful Dominican church of San Sebastian. There was a guitarist in the bar who was very handsome, and he sang traditional Spanish folk songs most weekends. Also, the bar man was very keen to encourage strangers to test his food, especially these capsicums. Part of the fun was that sometimes tourists would squeal with the heat, and the locals would laugh.
Pimientos de Padron are about the size of your thumb. They are fried in olive oil, salted and served. Some say that the largest ones are the hottest, others say one in five will have you begging for mercy. There is only one way to find out for sure, pick one up and eat it whole, from the stem!
They take a whole 10 minutes to prepare, and can have a group of friends laughing for hours.
You need: Olive oil, pimientos de Padron and good quality coarse ground salt. Wash the peppers and dry them properly. Heat a heavy bottomed frying pan with a healthy splash of olive oil, add the peppers and fry them until they blister and get some colour. Tip the peppers onto some kitchen towel and pat dry, then salt them (don't be shy). Serve with bread.
Eat and enjoy. Don't eat the stalks - they are just handles to save you on washing cutlery.
Pimientos de Padron are one of the oldest non hybrid peppers. As the story goes, Franciscan monks brought them to Spain from Mexico in the 16th Century. They gained a name for themselves in the town of Padron, Galicia (that's near Santiago de Compostela everyone - my favourite place in the whole wide world!). OK, so the fiesta of the Pimientos de Padron is on the first Sunday in August, but it is held in the courtyard of the Franciscan Convent of Herbon. In keeping with the Franciscan spirit of poverty, this little delicacy is cheap and cheerful! I am claiming it for the Feast of St. Francis, even though it is, technically, not Italian.
A little internet research informs me that, aside from a magic place in Bedford, pimientos de Padron can be sourced in the UK from here. For those of you who are finding the peppers hard to source, might I suggest growing your own?
Maybe later I will add some pictures of myself and my sister enjoying our capsicum adventures. I am going to serve them up as a starter before our main meal, comfort food of the highest order, patatas a lo pobre con setas, or 'Poor Man's potatoes with mushrooms'. I might get the recipe for that up too, when I have decided what it is. :)

Following on from your FB request, here, in honour of San Francesco, is a link to some stories and delicious stuff from his home region, Umbria. And even if truffles are prohibitively expensive here, I'm sure you could cook them in honour of the rich young man he originally was! (and then cook up some leftovers in honour of the poor man he became!!)