Choosing for a tricky customer 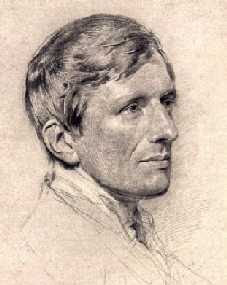 Today is the first feast of Blessed John Henry Newman. This means he doesn't have a traditional food yet. I have been weighing up the options, based on what I know about his attitudes to food and how I imagine him to be. As a young man, Newman was impressed by College food and drink: 'Fish, flesh and fowl, beautiful salmon, haunches of mutton, lamb etc and fine, very fine (to my taste) strong beer, served up on old pewter plates, and [in] mis-shapen earthenware jugs. Tell Mama,' he wrote to his father, 'there are gooseberry, raspberry and apricot pies'. Excellent.
Okay, he found the drinking culture of his fellow undergraduates a bit hard to take, remarking, 'if anyone should ask me what qualifications were necessary for Trinity College, I should say there was only one, - Drink, drink, drink', but all in all he seemed a happy chap. His college bill for his first full term included six bottles of the 'Best Sherry' and eighteen of the 'Best Port'.
In his 30's Newman traveled to Italy. Food and drink not being his particular concern, he doesn't write much about it, until he is ill with fever when we hear that he 'tried a rhubarb and ginger pill and sent out Gennaro for Camomile'. Sheridan Gilley has it that, 'Newman considered the tea from the leaves too rough, but one made with flowers was 'beautiful' and 'most refreshing'.

Newman moved to Littlemore in 1842, where he lived a very austere and simple life. On the evening of 8th October 1844, Bl. Dominic Barberi, a Passionist priest traveling through Oxford on route to Belgium, and a friend of Dalgairns, stayed at Littlemore. He arrived on top of the Birmingham coach, dripping with rain. As he dried himself by the fire Newman asked to become a Catholic. I mention this because Newman's feast has been chosen to commemorate the day of his conversion, not the anniversary of his death. He felt that it was this day that his life began again. Also, an open fire provides many opportunities for cooking snacks.
By this time he is 44 - at a feast for St. Cecilia (the Patron saint of Music) he visits Oscott Seminary where he finds 'the whole establishment turning fiddles and making punch'. Wiseman gives him a glass, which he insists is 'lemonade', and Newman finds it so strong he 'was obliged to dilute it twice or thrice of its quantity with water.'
The Birmingham Oratory is first established on the site of on an old gin factory. I am quite sure that Newman would not have had a liking for gin, but I did look up ingredients that hail from Birmingham. I came up with: Limes (being imported to Edgebaston in the mid to late nineteenth century), Bournville, Birds Eye Custard, Blue Bird Toffee, Cadbury's, Typhoo Tea and HP Sauce. I am not sure whether I can go anywhere with that little lot, but Bournville might make an appearance one year.
In Ireland, whilst working to set up a Catholic university, at the table of the Bishop of Limerick, Newman trembled at the sight of rare mutton, 'how it blushed on the first cut, but his Lordship was merciful and let me dine in the brown.' So, I am thinking meat is out. He just didn't seem to have much of a passion for it in his later years. 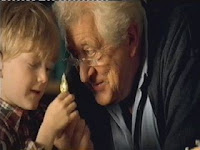 I don't know about you, but when I look at images of Newman as an older man, there is something of the Werther's Original about him. He is just so....English. I can imagine him taking tea in a sunlit lounge with a view of the garden, declaring everything is simply 'splendid'. I can see childish delight on his wizened face when someone treats him to a light tea cake. I am almost certain that he would have taken light meals and been fond of sweet treats. There are many ingredients to choose from here, lots of inspirations - but I think in the end, I am going to head for Vintage Oxford Marmalade Cake served with tea, or (perhaps) sherry. Another close runner was to make toast on the open fire and smother it in butter and Oxford Marmalade. Whatever is chosen, I think, it has to be something you would look forward to if, having walked for miles in the cold, dark rain, you entered a room with a blazing fire, an armchair and an ambition to talk far into the night with a warm hearted friend.
(Click Vintage Oxford Marmalade Cake to see the recipe)
Posted by Cloister

You are an absolute GEM with this : so much research, so much fun, such a sense of humour . . . and such an insight into Newman !
That said, I'm not sure that he really got to know Cooper's Oxford Marmalade, because it was launched in 1874, and he was well and truly at Birmingham by then, surely ?
However, it's still a fabulous receipt, and such an appropriate one that I'd doff my hat if I had one on . . . and if you want something for the summer, you could serve Royal Court Trifle, which also used to be made with Cooper's !

Aw! Thanks DM! You are very kind. Let us hope that someone sent him some Marmalade from Oxford once, or if not hope, imagine. Maybe next year we can have something with the Bournville, Marble Cake, perhaps?

Ever thought of making a book out of these? "Dining with the Saints: 365 Days of Feast Day Feasts," by Elaine Hutton.

One day Cole, one day!