Blue is for Rosemary

I am sure that many of you think that recipes and food can have very little to do with odd religion. However, never one to disappoint, I though would just share with you a delicious dish which is great shared with friends AND some stories about the ingredients which make it appropriate for Marian feast days and family parties.
Rosemary Oven Roasted Potatoes 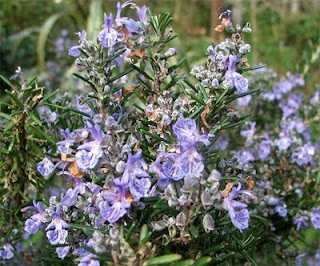 Peel and chop into little 1/2 inch cubes some fresh waxy potatoes and place them into a non stick oven dish. Drizzle them liberally with olive oil and season with sea salt and cracked black pepper. Grab a good sized handful of rosemary sprigs. Taking two or three of the sprigs, hold each one upright and run your forefinger and thumb down the central twig to release the leaves. Stir these into the potatoes and tuck the remaining whole sprigs into the dish strategically. Bake in the preheated oven for 45 minutes turning the little gems over frequently until they are golden.
This is a great side dish, it is great at a barbeque, as an alternative to chips, as a snack served in paper cones....anytime really.
Now, those stories:
Rosemary
Rosemary originated in the Mediterraean, but has now spread to most temperate climates. It holds the ancient Latin name lamiaceae, which means 'sea dew'. You may thing that this is because of the oceanic colour of its' flowers, and perhaps you are right, but there are more entertaining tales to be had about its' foliage. Rumour has it that during their flight into Egypt the Holy Family had cause to hide from some soldiers. Mary threw her cloak over a rosemary bush and knelt behind it with the child, Jesus. When she rose again, in safety, the flowers of the sweet smelling plant miraculously turned from white to blue in her honour.
You might think that one miracle story would be enough for rosemary, but no. The plant is also said to bloom at midnight on Christmas eve (no I have never checked, don't spoil it). It apparently will only grow for 33 years, the age of Christ, and then will wither and die.

Shakespeare's Ophelia famously says 'There's Rosemary, that is for remembrance", and indeed, it used to be common practice for mourners to throw rosemary onto the coffin from the graveside. Strangely, it has also been a traditional plant for the bride to have in her bouquet and is said to bring happiness to the couple. Often grown at the front of the house Rosemary has the reputation of being able to keep spirits, thieves and witches at bay. Medicinally it is a good cure for headaches and, the oil makes both excellent antiseptic and insect repellant.
Potatoes
Put the first new potato of the year in your overcoat pocket and you will be cured of rheumatism for life, so says the old folklore cure. The humble potato once fetched £300 a pound as an aphrodisiac. For Irish Farmers the best day to plant a field of spuds is the feast of St. Patrick, but should this day be missed Good Friday is a close second. Traditionally potato fields in Ireland were dressed with the blessed Easter Palm in the hope of a good harvest. At 'Lughnasa', celebrated on the Sunday nearest the 1st August, the first new potatoes should be tasted by the whole family for prosperity and good health to flourish during the year.
Now you are fully informed you can choose the most prestigious day on which to mix these two yummy ingredients! I think they are good for today, Our Lady of the Rosary. And I think they might be good for every other day too! (is that cheating?) Now, I know some (very few) of you might be thinking that I should have written something with a Dominican connection as well today. Maybe so. My best advice is to make up for it by serving these with some excellent wine, good friends and laughter.
Posted by Cloister

Well, I didn't get any (entirely appropriate for the Feast) Rosemary Potatoes yesterday - didn't have time, as I had to travel from one side of London to the other for Mass in Blackfen (and a Homily from Oxford, in the shape of fr Lawrence)- but I'll try and make up for it over the weekend, and hope that Mother will be understanding about the delay !