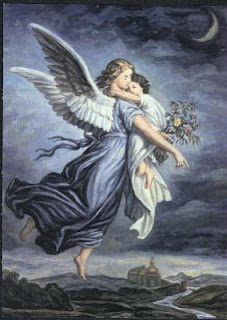 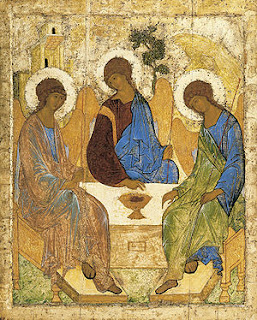 
The Angels are coming and we are going to celebrate - now we know what we a celebrating. First up - breakfast. Our Year 13 students make the staff breakfast to celebrate the Guardian Angels that look after them - visible and invisible. They celebrate with us the work we do together to set everyone in our community on the right path.
Posted by Cloister No comments:

A salad for the day that is in it 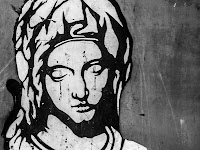 Plants have symbolic meanings. These sometimes vary from place to place. They come from the oral tradition, narratives from holy scriptures, appearance, healing properties and history. Figs are a symbol of abundance and initiation. This seems appropriate and excellent for today, the birthday of the Blessed Virgin Mary. 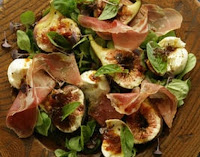 Gently tear apart 6 juicy ripe figs and place them prettily on your serving dish. Do the same with some high quality wibbly wobbly buffalo mozzarella, and arrange it around your figs. Tear purple and green basil leaves over the  top of both, and dress with an olive oil that has the taste of apples. You can add, if you choose, strips of prosciutto ham, salt and pepper.

This is a delicious starter. 6 figs will serve about 3 people, but it is easy to increase or decrease the ingredients, as everything is measured by the eye. 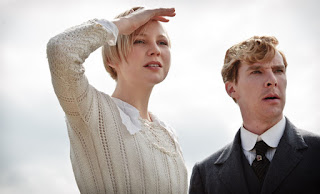 War has broken out. Tiegens chooses to go to war and explains his decision, first to his wife, and then to Miss Wallop, an unrequited affection -  a feminist, pacifist, libertarian writer. He is forced to think aloud about his decision, and defines Toryism in such a way that it comes to be a form of Feudalism: a love of key values, honour and absolutism. Notions of 'right' and 'left' show themselves up to be the sham that they are.

T: Miss Wannop, come to the fire and tell me why you won't talk to me.
What is that smell, do you know?

So those were the geniuses..... Well who am I to judge? That man over there isn't a genius. His name's Ruggles. Something to do with handing out honours at the palace. McMaster has got his ear.
Only perfectly proper. Only clean way. British way....... Well, I came over to tell McMaster I'm joining the army........ I hoped we respected each other...... At least I tremendously respect you, and I hoped you'd respect me too...... You don't respect me?

Well I would've like you to have said it.

V: Oh! What difference does it make? When there is all this pain, this torture? I haven't slept all night since.... I believe pain and fear must be worse than I'd....

T: dear...So queer. My wife used almost exactly the words you used not an hour ago. She too said she that she couldn't respect me.

V: We have to do everything we can not to lose our men, don't you see? Besides you know that you are more useful here.

T: They'll never have me back. The sentimentalist must be stoned to death. He makes everyone uncomfortable.

V: You shouldn't be proud of despising your country.

T: Don't believe that. I love every field and hedgerow! The land is England, and once it was the foundation of order, before money took over and handed the country over to the swindlers and schemers. Toryism for the pigs trough.

V: Then what is your Toryism?

T: Duty. Duty and service to above and below. Frugality. Keeping your word. Honouring the past. Looking after your people. And beggaring yourself if need be before letting duty go hang. If we'd have stayed out of it I'd have gone to France to fight for France. For agriculture against industrialism. For the 18th Century against the 20th, if you like. I hoped you'd understand?!

V: Oh,  I understand you, you're as innocent about yourself as a child! You would have thought all the same things in the 18th Century!

T: Of course I would, and I would've been right! *laughs*

But you do make one collect one's thoughts. Do you remember our ride in the mist, what you said about me three years ago? Well,  I am not that man now.

T: I'm not an English country gentleman who'd let the country go to hell and never stir himself except to say, 'I told you so'.