Everyone says we should keep a garden journal. The purpose I suppose is to record progress, and have a record of which plants went where year on year, and how they performed. I am a prolific keeper of notes, diaries and records, and there will be, no doubt, an old fashioned hand written school notebook with spidery scrawl and pencil line drawings, but for now I thought I'd start here. With pictures. To show exactly how much imagination G and I are going to need to make this place happen. 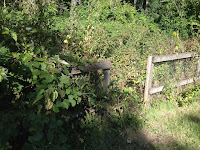 The Kitchen Garden needs to evolve slowly, it will provide all our basic staples as well varieties we enjoy which are not easily obtainable. Potatoes (Cara, Wilja, Charlotte, etc); Roots (Parsnips, Carrots, Celeriac, Beetroot, Turnips); Onions (Bedfordshire! (It's where I'm from!) Pinks, White and Reds); Brassicas (the usual suspects to feed us year round); Summer Veg (peas and beans); Squashes (Pumpkins!); Salad crops;Tomatoes; Everything Else.

This should be an idyl, the perfect productive garden (Nine bean rows shall I have there...). 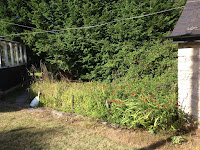 With herbs we need all things. Herbs for cooking, herbs for healing and herbs for bathing: rosemary, thyme, sage, parsley, marjoram, angelica, fennel, sorrel, bergamot, lovage, chives, mint. You name it, it will live here. 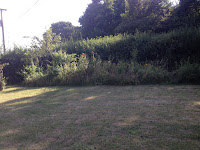 The wild garden remains a bit of a mystery. We would like to eradicate perennial weeds such as bindweed and establish native species to attract even more bees and butterflies. We will research and take advice on the best plants to flourish in this little tended 'wild' patch.Ultimately it should be largely self sustaining. 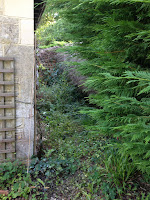 The previous occupants had the conifers drastically cut back outside the lounge window, now the view is a brown dead mess. We hope it may green up, but in the meantime we aim to treat the weeds in this dark area,and put down a weed suppressing mat and some gravel to join our driveway and brighten up the whole damp sorry patch. 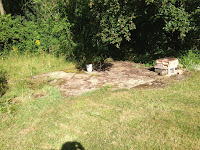 I have visions of an eight by eight checkers board; G has visions of a greenhouse (large), with compost bins conveniently located behind. We shall see. He may win on shear practicality. 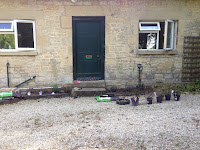 G brought home sixteen half-dead lavender plants from Homebase. They were free. Now they are nearly all dead. Still the precedent lives, and the front garden will be a lavender and rosemary garden. In fact, all around the house, in the borders underneath the windows there will be lavender and rosemary to waft in refreshing and soothing smells. We need to take cuttings from the Ma's.

And so endeth the tour of the work that is to do in the garden.. The visions are big, the labourers few and the work is much...,but paradise beckons. We live in eternal hope.

The chaos and the calm 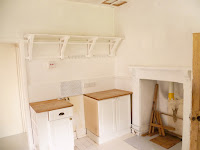 Anything called #lodgehousechallenge has to have an element of, well, challenge. And so began our journey into the lodge house. Moving day arrived, and the vans pulled up, G and I still hurling things into boxes. 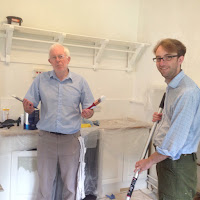 My sister called, Mum had injured herself, badly. In fact, as a trip to the hospital some days later would reveal, she had torn a tendon and ligament in the groin - a typical footballers injury, and it would take some months to recuperate. So, mid move, Bertie and I abandoned ship and headed to see the injured patient, bringing food, and later transporting her to hospital. Happily, now home again, Ma is on the mend.

Meanwhile, my husband's parents arrived to stay and help us get everything shipshape. We didn't really unpack. All our possessions are in the garage, with a skeleton of stuff to make the house operable, scattered around the various rooms. G and his dad set to in the kitchen. Five days of 10 hour shifts and, sweating at the brow, they transformed the place. G's mum, set about helping me get the piles of laundry through (our washing machine in old house packed up a week before we moved), and sorted. Soon, little B was able to abandon disposable nappies and return to his favourite brand of cloth (Charlie Banana).

Meanwhile, in the garden, we have been attempting to tame the wilderness in preparation for clearance come the winter. Brambles that stretch 10 metres deep need to be brought to heel, bindweed must be annihilated, nettles, thistles, thorns, ragwort and encroaching woodland all need to be banished. We admit we may need heavy machinery and help to complete this task in the end, but for now, it is us against nature.

Oh, and then there's the bees nest in the empty chimney, brought to my attention by the chimney sweep who gave our working chimney the all clear for a wood fire open grate.

G's parents left last Wednesday, and today he returned to work. We have done our best to make the house 'workable' for the next while. There is an oasis of calm amidst the hive of activity. #lodgehousechallenge is, after all, our home.

Next we will transform the sitting room, turning it into the cosiest lodge house lounge ever.
Posted by Cloister No comments: