The two Thomases: a gift of one from the other 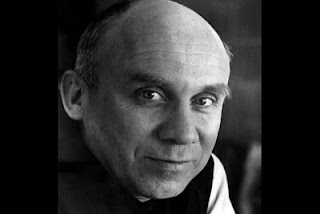 I have loved the writings of Thomas Merton for a very long time. His simple humanity shines through everything he writes. He is always worried about something. On this day in 1946, the feast of Saint Thomas of Canterbury, Merton was worried about work. His diary reads:


'...Then, yesterday at dinner, when the reader in the refectory was reading some spectacular stuff by Bousett on Saint Thomas of Canturbury, out of The Liturgical Year (the martyr dies, with his tongue still forming the word, 'l'eglise'), Father Prior handed me a telegram. I had been thinking: 'If anything comes for me in the mail, I shall take it as a present from Saint Thomas a Becket'. When I saw the telegram my heart sank into my dinner. The first thought that came to my mind was that the manuscript of The Seven Storey Mountain had been lost. Naomi Burton gave it to Harcourt, Brace only a week ago. I knew quite well that publishers always make you wait at least two months before saying anything about your manuscripts...I waited until after dinner and opened the telegram. It was from Bob Giroux. And it said: 'Manuscript accepted. Happy New Year.''

My heart sank into my dinner. What a simple and evocative description of nervous apprehension that is. Thomas Merton often writes like that. Why use big words when you can use small ones? The Seven Storey Mountain, although not his first publication, was his most popular book. It was with that book he became something he would detest me saying, he became an author. He never wanted to be an author as a monk. He said he felt like a duck in a chicken coup; all he ever wanted was to be a chicken, but he had to go and become a duck.....(to understand some bits of Merton you have to be a bit cracked) :)
Thomas is honest. On the Feast of St. Mark, April 25th, 1947, he writes:


'Typewriter broken. And now the infinite God has to compete, for possession of my mind, with the image of  a beautiful new typewriter with French accents on it...'

You can't really help but relate to how he feels, can you? Later in the year he turns his dry humour on the liturgical music chosen for the Solemn Profession of two of his brethren. Anyone who has been on a Marian pilgrimage will sympathize with this from June 14th, 1947:

At all these pontifical functions they have been playing some weird music on the organ. It reminds me of the stuff you used to hear at the movies before the silent movies went out and the talkies came in. Now I discover it is the hymn the faithful sing at Fatima. Mother of God, why do you let these things happen?

And with that, I am off. :)
Posted by Cloister