'Tis the year's midnight, and it is the day's

John Donne, in A Nocturnal Upon St. Lucy's Day, Being the Shortest Day evokes something of the atmosphere of today's feast. Before the Gregorian calendar the feast of St. Lucy fell upon Winter Solstice, the very darkest day of the year. This year that will be December 21st, but Lucy still gets her feast on one of the shortest days at least, today, the 13th December. Her name means 'light'. It comes from the Latin, lux, lucis. I guess the story of Lucy is well known. She was the daughter of a noble pagan family who dedicated her virginity to Christ. Her parents had other ideas, and had pledged her in marriage to the local rich boy. When she could delay the wedding no further, she finally told her fiancee. He told the Romans who, at the time, were big into persecuting Christians. She was arrested, asked to make a sacrifice to the Roman Emperor as a God and, on refusal, sentenced to live as a prostitute. She is attributed as saying to her Roman judge Paschasius:

No one's body is polluted so as to endanger the soul if it has not pleased the mind. If you were to lift my hand to your idol and so make me offer against my will, I would still be guiltless in the sight of the true God, who judges according to the will and knows all things. If now, against my will, you cause me to be polluted, a twofold purity will be gloriously imputed to me. You cannot bend my will to your purpose; whatever you do to my body, that cannot happen to me. 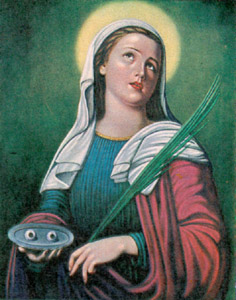 When the men came to take her away she would just not be moved. Literally. Not even by a team of oxen, which went away exhausted. So, the Romans set about killing her. First, they gouged out her eyes. Some say an Angel of the Lord came down and restored her sight. Then, they surrounded her with wood and tried to set her alight, but the wood would not burn. Finally they slew her with a sword, martyring her. Pictures of St. Lucy are gloriously gruesome, her eyes presented on a platter. Marvelous.
St. Lucy set herself against the physical violence brought against her, and she gave a good fight. I like that her refusal to be pushed around is recalled so vividly in the stories about her. In his poem, Donne is said to be mourning the death of his wife, who died in childbirth, aged just 31. Perhaps Lucy's story reminded him of the strength and power of women to fight and overcome so much. St. Lucy is one of only seven women, aside from the BVM, who makes it named into the Canon of the Mass. I like that she is there. 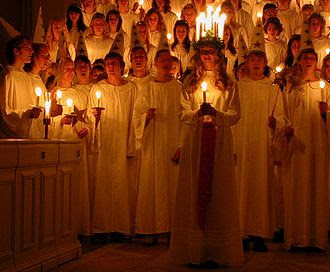 St. Lucy's day is celebrated by Catholics, Anglicans, Lutherans and Orthodox - hurrah, big party! In Scandinavian countries it is marked by making a crown from pine boughs and attaching lit candles; then asking young girls dressed as the saint to wear them on their heads. Sounds like pyromania to me, but it is very beautiful. A festival of light in darkness, of good over coming evil, of life overcoming death.