St John of the Cross: My OCD Saint 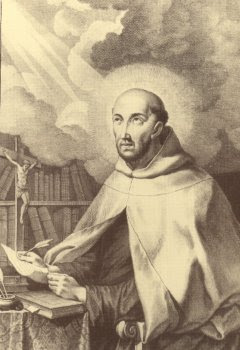 St. John of the Cross wanted to join the Carthusians. I guess that tells you a bit about him: he liked order, routine and silence. No messing around. Before he got to the Carthusians though, he met St. Teresa of Avila. She inspired him with her vision for a reformed Carmelite order. Within a year (1568, as it happens) he  joined the Carmelites and set about implementing St. Teresa's plans. Teresa wanted to run an altogether tighter ship: more prayer, more silence, more discipline, more work. She distinguished those communiites which welcomed her regimen by renaming them the Order of Carmelites (Discalced), meaning 'without shoes' - who needs such frippery? Funnily enough, St Teresa wasn't that popular with her fellow religious sisters. Sometimes they wouldn't even let her in when she came to stay. The shame.

St John OCD (I think the initials are providential) started, easily enough, in one of Teresa's convents, as a confessor. Then he branched out to a farmhouse, where he founded a Discalced monastery. When he went to his brothers to spread the new plans for development reception was terrible. His Superiors in the Order (with shoes) had him arrested and imprisoned in Toldeo. In an ill fated effort to get him to ease up and chill out they subjected him to a brutal routine, starving him and even beating him regularly before the community. They stuffed him a prison cell only just big enough to fit him. Nice. I am beginning to see why they needed reform, and I am not sure why they thought this would work?
It was in this environment that St. John wrote his most famous poem - Spiritual Canticle - on paper passed under his door by a friar guard. Unsurprisingly, John's harsh treatment and its effect upon his soul coloured this, and all his subsequent work, particulalry Dark Night of the Soul. He escaped from prison after nine months, managing to wiggle his cell door from its hinges and, depending on the account you read, either scaling the walls or jumping out a nearby window - hurrah!
Unusually, for a poet, St. John wrote detailed analyses of his work, explaining line by line the theological significance of his thought. Perhaps it is because of this that I can say with confidence this his poetry contains some of the deepest, most beautiful and most sensuous religious language ever written. It is amazing. 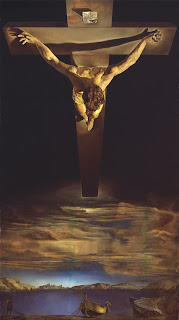 It is clear from The World Is My Cloister that I am never going to be an ascetic. I fell in love with St. John's writings walking the streets of Salamanca, eating tapas in smoky bars, sitting amongst the jasmine flowers in the city gardens, creeping round the candlelit cathedral and the great Dominican church of San Sebastian. The truth be told even further, I fell in love with St. John's handwriting before I ever read a word of what he wrote. His letters were held in the Cathedral Museum; they looked like an inky spider had taken a dance across the page, a marvel to behold. I would never attempt St. John's religious rigor - I wouldn't want to. And, I am not sure what he would make of my interest in exploring the world through embracing the excitment of my senses: taste, touch, smell - the brilliance of images, the glory of sound. But, his poetry has a depth and a passion I adore. It is he who would give inspiration to Dali to paint his Christ of St John of the Cross, and who has stood before that and not been moved? He deserves a great  feast; for me it has to be something to reflect his love and his language more than his ascetic nature. I cannot feast on raw turnip. For him today -  a deep, full flavoured, passionate dish from the heart of Spain, and a full bodied red wine to match. Don't tell me: he was a vegetarian who never touched a drop. Well, he must have tasted something like this in his youth,  and I bet the memory of it got him all the way to heaven: Carne adobada y guisada en vino tinto.
Posted by Cloister

I don't know who he wrote it to, but St J of the X once famously said:
"Beloved, all that is harsh and difficult I want for myself and all that is gentle and sweet for thee" So I think he would be delighted to think of you cooking up and enjoying a hearty feast!

You are right of course, Silvana. And St. Teresa, who I have done no justice to here, bless her, is often quoted as saying: 'Lord, deliver is from sour faced saints'. Which is exactly what I would be if I couldn't celebrate in style. :)