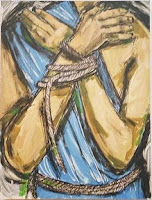 Jesus rests in his Father, but the Father in turn does not allow him to rest. God appears to him as father, but the Father appears to him as God. God goes on being a mystery, being God, not man, and therefore different from and greater than all human ideas and expectations. God becomes temptation for Jesus when he has to discern true saving power. God becomes engima for him by absolutely holding back the day of the coming of the Kingdom, which Jesus had thought so close at hand. God becomes mystery for him when God's will goes beyond the logic of the Kingdom and demands an undreamt of suffering at the end of which lies the cross. God becomes scandal to Jesus when he listens to God's silence on the cross.

There are two people in this story who suffer the loss of reason. Reason, given to humanity as a gift from God, is suddenly stripped from this scene leaving the two central characters with only their natural instincts to follow.

The sentence which Pilate hands down is a complete injustice, doubted even by his own convictions. Luke’s Gospel, in particular, gives no sense of Pilate understanding his actions. He is swayed by the will of the crowd and his will is subservient to their ambitions.

Jesus on the other hand, although in his humanity he was surely suffering from a similar abandonment of reason, remains obedient to the will of the Father. He can no longer understand what is happening to him, but when his human reason fails, he listens to God. Jesus had to surrender the gift of reason; the gift we need to inform our thoughts, prayers and actions. Human reason can't accommodate the ‘logic’ of the cross. In doing so he adopted the divine path: the road of obedience, faithful listening.

The disciples, at this point, had all fled from the scene, and from the way of the cross. And, who could blame them, since this would be a natural reaction. We all want to run away from the humanity which we find ‘ugly’ in life: the wounded, the sick, the homeless, the vulnerable, the dying. We can’t run away from such people, as we are sometimes tempted to do, because when Jesus chose to follow the will of the Father, he united himself with the ‘ugly’ things of life: pain and suffering.

We can't leave because in order to dignify someone it is necessary to acknowledge them, their experience, and their pain. If we do not do this we disregard them, ignore them and pretend they are not important. When we want to understand someone, particularly a person who has been through many trials, we listen very carefully. We imagine what they went through, feel compassion for their losses and empathize with their loved ones. In the same way, in order to 'dignify' the life of Jesus we are called to listen, imagine, feel and empathize. His obedience deserves our attention simply because it was this that led him through the cross to union with the Father.