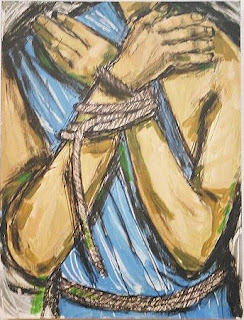 I. Jesus is condemned to death
Illustration: Ken Cooke

Pilate then summoned the chief priests and the leading men and the people. He said to them: ' You brought this man before me as a popular agitator. Now I have gone into the matter myself in your presence and found no grounds in the man for any of the charges your bring against him. Nor has Herod either, since he has sent him back to us. As you can see, the man has done nothing that deserves death, so I shall have him flogged and then let him go.'
But as one man they howled, 'Away with him! Give us Barabbas!' (This man had been thrown into prison because of a riot in the city and murder.)
In his desire to set Jesus free, Pilate addressed them again, but they shouted back, 'Crucify him, crucify him!'. And for the third time he spoke to them, 'But what harm has this man done? I have found no case against him that deserves death, so I shall have him flogged and then let him go.' But they kept on shouting at the top of their voices, demanding that he should be crucified. And their shouts kept growing louder.
Pilate then gave his verdict: their demand was to be granted. He released the man they asked for, who had been imprisoned because of rioting and murder, and handed Jesus over to them to deal with as they pleased.