Walking the camino I met a Jewish man named Walter Koch, who at the time of my meeting him in October 2002, was 76 years old. He had been imprisoned in Auschwitz when he was fifteen years old, and on his body he bore terrible scars: lost ribs and teeth, and a number on his arm.

He was walking to Santiago de Compostela ( a pilgrimage to the shrine of St James the Apostle) for the third time. He was just about to complete 700.000 kilometres. I was embarrassed because at the end of a very long day walking, he over took me at a brisk pace proclaiming 'Lift your feet, peregrina. You are nearly home!'

He played a vicious game of dominos, and in a mixture of many languages told me his story. Much of his life was full of suffering and it led you to question 'why did this happen?' This was a question alien to Walter. He argued that the more important questions were not about the past, but the future. He did not walk on pilgrimage to reminisce about the past. He journeyed because of the past, but he walked into the future. The only question for him that was worth asking was not 'why did this happen?', but 'why are you walking?'. 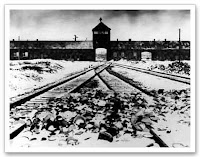 Primo Levi, an Italian Jew, was also in Auschwitz. He recounts how one day he was going crazy with thirst and he saw a beautiful icicle. He reached out to grab it and to suck it, but was stopped by a guard. So Levi said 'Warum?', 'Why?' And the guard replied, 'Hier ist kein warum', 'Here there is no "why?"' We may still all live through moments that are absurd, where there is no why or wherefore. Then we cannot seek for easy answers. It would be blasphemous to offer explanations. All we can do is trust that God is here.