Three saints this month caught my attention. That is not to say there was not a wealth of excellent folks from which to choose to take inspiration, but that my mind was focused on a particular theme. It won't surprise you to know that the theme was education and teaching. I can't help it. Anyhow, the inspirational folks and the food. Let's talk about those. Inspirational folks first, food later. The recipe for the brownies is below this post - scroll down if you must :)
First, the inspirational earthly saints I am actually living with, and for whom I made these brownies. I am lucky enough to have landed accommodation in central Oxford for a few weeks while I complete a temporary teaching post. It is thanks to the generosity of the RSCJ (Sacred Heart) sisters that I have a home close to my work and a beautiful kitchen to cook in. I am learning from those I live with, and so they must be recognized as my primary teachers. People you live with always are; and although who those people are changes (in my case quite often),  I always remember things that happened when I was living with so and so or X. At the moment, two of my housemates are ex-teachers, and philosophies of education infuse the building. I made what follows for the birthday of the good RSCJ friend who thought up the plan to let me stay for a while. So, to her, thanks :). The sisters have also been enthusiastic   about thinking up good food for saints - although they are mischievous. If I had more time on my hands there may well have been a recipe for roast pork for the Conversion of St. Paul!

Next, the heavenly saints who appeared this month and taught me something about teaching.
Angela Merici - 27th January - a hero for women this one. Angela looked around her hometown and saw that girls got no education and therefore, could have no hope of improving their lives from the poverty they were born in to. She knew this was wrong. In the 1500's women were not allowed to teach, and unmarried women were not supposed to go out alone, even to do good works. Nuns were the best educated women, but they were not allowed out of their cloisters. Angela recognised that things needed to change. She brought together a group of unmarried women, Franciscan tertiaries like herself and other friends. They went out into the street, gathered together the girls they met and began to teach them. These women had little money, no power and no social status, but they changed the status quo. Although Angela's Company of St. Ursula was never a formal religious order in her lifetime, the Ursuline Sisters later established themselves as the first order of religious sisters dedicated to the education of women. In Angela's time the thought of educating women was 'radical', her recognition that this was wrong began to change that. So, thanks to her. 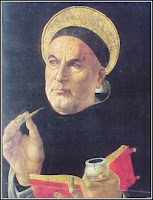 Thomas Aquinas - 28th January - If I neglected to mention this chap as a great teacher there would be trouble. After all, the whole point of the Summa Theologica is that it is a textbook - a practical teaching document. However, it is not for all his intelligent, inspired, incisive and, lets face it, lengthy thought that I really love Thomas Aquinas. I really love Thomas because his teacher called him 'a dumb ox'. His teacher was wrong. That is a valuable lesson for all educators. You never know what the students in front of you are capable of. Also, Rosamundi notes Thomas' sage advice that 'sorrow can be alleivated by a good sleep, a bath and a glass of wine'. I tried to find out where the good Doctor wrote that, but I can't. You have to admit though, it is good. And after a long day at work, when nothing seems to have gone quite right, it is genius.

John Bosco - 31st January - a man full of acrobatic tricks and skilled at juggling who used his talents to catch the attention of street urchins. John Bosco, who founded the Salesians, has got to be my Patron Saint of 'whatever you have to teach, for God's sake, make it interesting!' John  Bosco could do magic tricks, he was a musician and a skilled entertainer. He could keep the attention of his audience - draw them in -and once he had them hooked, teach them! An account of his life can be found here. He is great. He believed education was a 'matter of the heart', and said that students should not only be loved by their teachers, but that they should know that they are loved. Teachers, he said, should speak with nothing but kindness. That was pretty radical for the 19th Century, and I think, it is probably still radical now - a challenge!
I made Chocolate Brownies with Fresh Raspberries and Amaretti Biscuits to go with this post. Why chocolate brownies for the post about teaching? Simple. Teachers need chocolate. Chocolate helps.
Posted by Cloister

I'm not really sure how I came across your blog the first time, but I've been following now for almost a year--and I just wanted to say thank you. This is only my 2nd year in my PhD, but the work of being a teacher and a researcher at the same time can be pretty isolating. It's encouraging to read your thoughts and realize that someone else has thought about/gone through similar things. Thank you for sharing your experience. :)

St John Bosco's autobiography is worth a read - a bit of googling will turn up a multilingual Salesian site. He gave up juggling etc. when he became a seminarian.

As I recall it was other students who christened St Thos the dumb ox, and St Albert who said something about the lowing of this ox being heard by all of Europe. But I am too lazy to go and check ...