The end of days - A cure for cold filled pagans

I love the last day of the liturgical year. The readings are magical. The great dream of Revelation comes to the fore. A prophecy of the end times.

The angel showed me, John, the river of life, rising from the throne of God and of the Lamb and flowing crystal-clear down the middle of the city street. On either side of the river were the trees of life, which bear twelve crops of fruit in a year, one in each month, and the leaves of which are the cure for the pagans.

The ban will be lifted. The throne of God and of the Lamb will be in its place in the city; his servants will worship him, they will see him face to face, and his name will be written on their foreheads. It will never be night again and they will not need lamplight or sunlight, because the Lord God will be shining on them. They will reign for ever and ever.

The angel said to me, ‘All that you have written is sure and will come true: the Lord God who gives the spirit to the prophets has sent his angel to reveal to his servants what is soon to take place. Very soon now, I shall be with you again.’ Happy are those who treasure the prophetic message of this book. 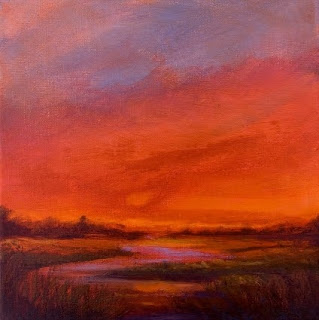 How evocative of this time of year is that? Oh, I know, it is hard to understand. But, it is romantic and beautiful, and full of that most important thing - hope. Out in the garden everything is still, covered in thick frost and a covering of snow. At the front of the house, by the door, a single red rose is in bloom. The raspberry canes and fruit trees are bare. The apples have all fallen - except one - it is being stubborn for the sake of the birds I think. The ground feels frozen to walk on. Yesterday there were clear blue skies and a chill wind that cut to the bone. Today is more overcast, snow threatening - but that cold wind is still out there. It is funny how the readings from Revelation have the same colours as a northern winter sunset, the one we see so early in the day at the moment. I love those colours, the sun at its most vivid: reds, pinks, purples, oranges. Also,  the seasonal afflictions of the season have taken hold in my house. I have a blocked up nose, a sore throat and poor, exhausted lungs. I need a fruit filled cure. So, whilst the log fire heats the front room, and before I settle in to watch Merlin on the telly, sunshine and cures from the kitchen.


The cure for (cold filled) pagans


6 blood oranges (the red centre is beautiful, and the juice sweet - but if you cant get them, just get good big juicing oranges instead). 2 grapefruits. 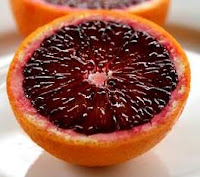 Just squeeze them up, and gulp it down. You are sure to be better by morning. Or if in real need, try grating some ginger into a saucepan, adding a little honey and a few cloves, and gently heating the freshly squeezed juice. Don't boil it though, just hot enough to warm your insides up.


Chop the onion for the soup roughly. Peel and crush the garlic with the back of your knife. Add them to a heavy based pan. Grate in the ginger. Add the lentils and pour in one and a half litres of water. Bring to the boil and then turn down to an enthusiastic simmer. Stir in the tumeric and chilli, season and leave to do its thing, with a lid on, for twenty minutes.

Meanwhile, bring a medium sized pan of water to the boil. Peel and scoop out the pumpkin, then cut it into the fat chunks. Boil for about ten minutes, or until they are tender. Drain them and set them to one side.
To make the topping, peel the onions and cut them into thin rings. Fry them gently in a pan with the groundnut oil, until they colour. De-seed the chillies and slice them finely. Peel and slice the garlic finely too. Add these to the onions. Cook until the onions are a deep golden brown.
Remove the lid from the lentils and turn up the heat, boiling hard for five minutes. Remove from the heat and add the drained pumpkin. Blend the soup with a handheld blender until smooth (be careful!). Stir the roughly chopped coriander through the soup and serve. Topping each deep bowl of goodness with a spoonful of the spiced onions.

Nigel says that this is a soup that both whips and kisses. It is warm and releases a slow build up of heat from the base notes of chilli, ginger and garlic. For today it is perfect. We had it with hunks of rustic bread and poachers cheese on the side. You can't go wrong. The colours are right for today too, all fiery oranges, reds and deep ochre. Perfect. And, as I was serving up I look at my watch, 6pm. The new year begins, quietly...waiting.
Posted by Cloister