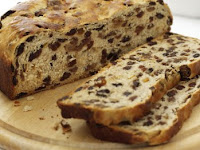 'Trot the horse round the stable again, Mary' - That is what my Nana used say if you poured the tea from the pot too soon. Tea making was a ritual, and it should never be rushed. You had to take time to warm the pot, gently pour boiling water over the leaves, tuck the tea in under its cosy and allow it to brew. I tend to rush making a cup of tea these days, and I rarely make a pot of it, but today, today is the day for drinking tea.

All Souls. A day for remembering those who have been loved and lost. Those who live in the heart. Those whose voices you hear when you find yourself doing something they always did, or something they would never have done. All Souls. A day for going slowly, remembering, and telling stories.
On days like this, you need to invent meal times. It is a day for elevenses and afternoon tea; something after supper or a quick bite for visitors. Traditionally, in Ireland, Barmbrack is the food you need. Beautiful toasted and buttered. A light something no one can turn down. In England, Soul Cakes fit the bill, and are about the right size that everyone will be tempted to just one and sit down to pass the time. Both foods are traditional to Samhain, the coming of winter. They are left out, candle lit, on the eve of All Hallows to feed hungry souls that passed that way. Today, served with tea, they can serve the same purpose.
Barmbrack (makes two small loaves)
You need:
1oz Fresh Yeast
3oz Caster Sugar
10 fl ozs tepid Milk
1 egg, beaten
1lb strong white bread Flour
1/2 tsp Cinnamon
1/4 tsp grated Nutmeg
1/2 tsp Salt
2ozs Butter
8ozs Sultanas
4ozs Currants
2ozs Mixed Peel
2 tbsp sugar dissolved in 2tbsp hot water to glaze
Cream together the yeast and 1 teaspoon each of the sugar and milk. Mix well and then add the remaining milk and egg. Sieve flour, spices and salt into a mixing bowl, rub in the butter and add the fruit and peel.
Stir in the yeast mixture and beat well with a wooden spoon then, using your hands, form a dough and knead on a floured surface for about 10 minutes until the dough becomes elastic. Place in a greased bowl, cover with oiled polythene and bring it to a warm hotpress (airing cupboard). Leave there for about an hour.
Divide the dough in half and knead each for a few minutes, then place each in a cake tin and return to the hotpress for another hour until well risen. Preheat the oven to 200C.
Bake for 30 - 35 mins and then remove from heat. Dissolve sugar in hot water and glaze while hot.
Soul Cakes
I live in the Wychwoods, Oxfordshire. It is a place that is full of stories and traditions, and here is one that goes well for today.
A soul, a soul, a soul cake
Please, good Missus, a soul cake,
An apple, pear, plum or cherry,
Or anything to make us merry 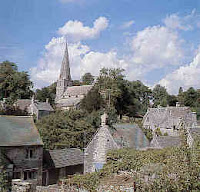 The Old Soulers' verse was a kind of begging song that asked for reward for the Soulers' services of offering prayers for the departed on All Soul's Day. In the Cotswold village of Bisley there is a 13th Century Poor Souls' Light in the Churchyard - thought to be the only one in England outside a Church. Inside its carved stone spire, candles were placed for masses to be said for the poor of the parish. It stands on the site of an ancient well head, which became known locally, as The Bonehouse. The story is that one dark night a priest was summoned to take the Blessed Sacrament and never reached his destination. Later, his body was found at the foot of the well, and the parish was subsequently excommunicated for a period. No burials were allowed in the Churchyard, and the dead had to be carried for internment to Bibury - seven miles away. There is still a corner of the Churchyard at Bibury called 'Bisley Place'. Soul Cakes became the traditional 'reward' for the itinerant Soulers. As with so many cakes devised for religious festivals, the Soul Cake is spiced. An echo of the spices brought to the Nativity, they say.
You need:
1lb Plain Four
6ozs caster Sugar
1 level tsp ground Mixed Spice
6ozs Butter
4ozs Currants
3 Eggs yolks
Beat the butter and sugar together until light and fluffy, then beat in the egg yolks gradually. Sift the flour and spice together into the butter mixture. Beat well and add the currants with enough milk as necessary to form a soft, but not sticky dough. Cut into as many pieces as you would like cakes, and form into rounds. Place on a greased baking sheet and mark each cake with a cross. Bake in a pre-heated oven at 180C for about 15 minutes, until risen and golden.
Posted by Cloister