Sitting in darkness on the balcony of the flat in Guejar Sierra, Andalucia, the sound of cicadas, crickets, bats, dogs and the odd car on the mountain can be heard from the landscape. The moon is full and shines down on the mountain casting strange shadows on the trees. Leonard Coen is singing from the ipod in the front room where Gemma is reading. 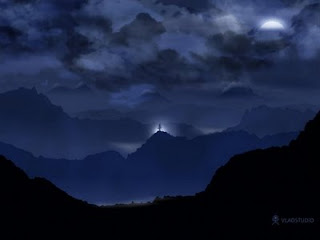 The first night of our holiday and already, quietly, everything is beginning to stop. There is a quietness here, and a stillness that many people search for in hustle and bustle. But, it is not a physical stillness; this place is alive. The steady release of everyday concerns, and a break from worrying about the working treadmill allow other delights to call for attention.
People say there is no such thing as silence. Perhaps they are right, but paradoxically, taking time to note the sounds of silence projects stillness into the landscapes of our holiday retreats. People say: 'It is so beautiful here; so quiet, so still'; very rarely is that true, but it speaks volumes about what happens when everything stops long enough to hear your own heart beat.
Here are my top five sounds of silence:
1. Buckden Towers - The fens of Cambridgeshire

You could hear the A1 from the retreat centre I used to work in; not close, but in the distance. There were always groups of children running around the grounds; people ringing the doorbell or calling on the phone. The heavy oak doors slammed. Outside there were birds in the trees, and creatures rustling in the undergrowth. Sometimes the local farmer grazed his sheep on the field.

2. Creeping off the street - The Blessed Sacrament met

In Salamanca the busy city was always wide awake, but tucked between the shops and the cafes were Churches whose doors opened during the hours of business. Nipping into the coolness of the twilit chapel the sounds of the street become muffled, not absent but separate. New sounds are present, the creak of old wooden benches, the scrape of their movement on stone; sometimes you can hear the breathing of others in prayer, the footsteps of someone walking. When the door to street opens all the hustle and bustle floods in, ebbing back out as the door slowly re-closes.

At 9.05 the Church is full; there is only one mass in my Parish of a Sunday. Everyone is talking, the children are meeting each other in the aisles, the ushers are welcoming people to their seats, a few brave singers are gathering to form the choir; the organist practices a few notes. Some people kneel to pray, some read the newsletter. Then with the sound of a bell at 9.15 a silence descends, and the community stands to celebrate the mass.

The crunch crunch crunch of heaving boots walking on gravel scraped to halt as the sun peaked over the tip of the mountain ridge; a dawn sunrise. The birds, jumping through the wheatfield trebled their chorus to greet the day. Crickets and cicadas chirrup and hop across the pathway. Stillness. Then, the thud of a rucksack hitting the ground, and the sigh of a pilgrim hunckering down to watch this spectacle of nature in more comfort. People breathing heavily after walking the first few kilometres of today's pilgrimage towards Santiago de Compostela - a long day ahead. Expectation.

The sound of a million people talking in different languages, shouting out, singing, laughing, joking. There are cars, lorries and buses squeezing through small crowded streets sending pilgrims in wheelchairs and pedestrians into tacky shop displays to escape from the crush. Here the hustle and bustle is equal to a city going home of a Friday; everything smells -  food, drink, people, petrol. Stopping to watch; everything and nothing - all human life is here.