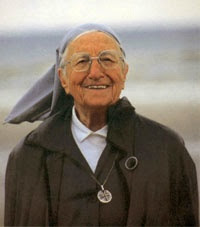 I am rushed off my feet, and demotivated. This is a combination which is not terribly helpful to me. However, to cheer me up I have found a distraction: the inspiration of the female human spirit.
The following is the work of  Lizzy Davies in The Guardian, Saturday 16th August 2008.

She was a bright young thing of the Parisian annees folles, the inter-war 'crazy years', who danced into the night with smartly dressed boys and lusted after the latest throw-away fashions. Proud, wilful and flirtatious, she once fell in love with a man for his seductive intellect and beautiful handwriting. (From E: Haven't we all fallen in love with a man for this?)
Paris is in thrall to a  scintillating new volume of memoirs but they are not those of a bohemian writer or 1920's film star. After a life of devotion to charity and Catholicism, France's favourite nun is revealing her naughty side. 'I'm no saint', declared Soeur Emmanuelle in a collection of interviews to be published next week ahead of her 100th birthday. (100? Excellent work sister!)
"I'm bad tempered. I'm vindictive, angry; sometimes malicious. People say I'm hard, capricious and proud." (Sounds like a description of someone I know....)
For the country that views the nun as a national treasure, this self criticism will be hard to swallow. Soeur Emanuelle, born Madeleine Cinquin in 1908, has been dubbed the French Mother Teresa for her work among the poor of the third world. Her popularity has not waned with age: this month she was voted France's sixth most popular personality in a newspaper poll, ahead of Carla Bruni, Gerard Depardieu and Theirry Henry. (Who? Eeewww! and 'oh, yeah - him')
But the image she portrays of her youthful self is a very different woman: a girl torn between a craving for 'immediate pleasure' and an awareness that her vocation was calling her elsewhere. 'I thought only about having fun, dancing, going to watch films, going to the theatre,' she said. 'I loved dancing, preferably with nice looking boys. My mother used to say to me, 'You want boys to like you, to admire you. And of you become a nun...' And I would tell her, 'For God, I would leave the boys alone.'
(And for this, if nothing else, you will enter the Kingdom of Heaven!)
Speaking from a peaceful retirement home in the south of France, the Belgian born daughter of a lingerie manufacturer recalled hopping between European capitals in a quest for new thrills with no thought for the cost. 'That was how I behaved,' she said 'Money was no problem for me.' (Ha! Her parents made knickers!)
After taking her religious vows in 1929, Soeur Emmanuelle travelled extensively, teaching for 40 years in the Middle East and North Africa. It was in Tunisa that she met the 'intelligent and seductive man' that she fell in love with.
'I knew what it was to have you heart beat fast.' But she never told him how she felt. 'We were taught never to tell a man you loved him. I thought about it. But I had chosen God. I have no regrets' (Really, none? But, how much did it hurt to love and not say?)
At 63, after she saw the poverty of Cairo's slums, she began working among street dwellers. Her experiences led her to espouse unorthodox Catholic beliefs. She saw no reason why clerics should not wed, while working with young girls who were regularly falling pregnant in Cairo led her to write to Pope John Paul II in support of the contraceptive pill. (A woman who takes both her faith and the practicalities of living very seriously, hoorah!)
This formidable spirit defines her, says Jacques Dufresne, co-author of 'I'm 100 years old, and I'd like to tell you....' 'In a world where people feel that they are being lied to...we love those who put in to practice the ideas that they proclaim.' (What a strange title for the book - say it how it is, sister, don't hold back.)

You can see it now, can't you? I am going to end up buying that book. There is a lot I could learn from this lady.
Posted by Cloister