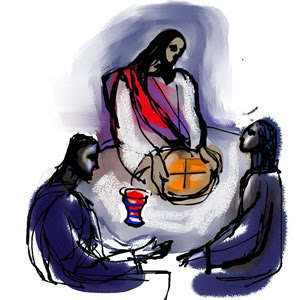 The International Mass at Lourdes is always powerful. It was busy, noisy and crowded. I have never wanted to have a seat at this celebration, there are too many other people with a greater need. This is just as well because if I were to want one I would be disappointed. Eventually I settled between friends leaning against the wall at the side of the Pope Pius X Basilica. When everything is so loud and brash there is a need to retreat into a quiet bubble of contemplation. I can make it silent in my heart. I wanted to focus on the intentions of those next to me. It was good to be huddled together so closely, their presence made it easier to concentrate on their thoughts and those they love. I am quite sure we were all preparing for mass saying the Rosary. There was a purposeful quiet in our little huddle. I took the luminous mysteries for my meditation, in such an atmosphere of celebration it seemed appropriate somehow.
I knew the Gospel would be the Feeding of the 5000, having looked it up during morning prayer. Sometimes the readings in all the different languages can be hard to follow. After the Gospel was read there was complete silence for reflection. It was still, but the atmosphere was expectant, hopeful. There were lots of thoughts flying through my head, scatter brained as I am. I can't really concentrate in places so full of stimuli, ordinarily I would kneel and let my body pray where my mind fails, but it was not quite appropriate here and would have created too much scandalous attention. There was an overwhelming sense that the Feeding of 5000 was about to happen again, through the eucharist, to satisfy the needs of 25 000 pilgrims. People say there are no such things as miracles, but watching the faces of people in that place it is disbelief that amazes me more. I have heard it said that there is enough light in the world for those that want to see the miraculous, and enough darkness for those of an opposite disposition. The International Mass was flooded with light.
At communion I watched the people seek out the priests from whom they should receive the eucharist. Often this is a fairly disorderly affair. I was touched by the need in the faces of the crowd; they were chasing after grace. I still had not been to confession, and was not intending to go until Wednesday (it would take me that long to work up to it). The only prayer I had left was one of surrender. It was time to hand myself over to be broken and made new. There was only a short time after communion before the final blessing and the inevitable rush to beat the crowds from the Basilica. We were all still huddled against the wall, friends praying either side of me. I wondered what they were praying for and, thinking about that for a while, prayed for them before standing to receive Benediction. When I skipped off to find the lady I was charged to look after and bring from the Church in a wheelchair I was really quite tearful, but as usual the business of Lourdes came to the rescue and I could hide behind the jobs that needed to be done.
Posted by Cloister

Wonderful, again!
I was indeed saying the Rosary too before Mass but I took the sorrowful mysteries- to me they seemed so appropriate to those faces, row on row, of the sick and the hurting. Immense distress, intense physical pain, humiliation, burden and, inevitably, death. I could see all of that in their faces and yet also hope because after all that sorrow comes the glory of the resurrection. I got told off later for saying the sorrowful mysteries on a Sunday but at the time I didn't even think about that, they just seemed to me to be the most appropriate ones for the time.
During the Mass I found myself totally incapable of praying for myself, all I wanted to do was offer prayer upon prayer for those all around me. The wonderful people I was there with, specifically those either side of me, but also all those surrounding me who I didn't know, had never met, never would meet but who were all there with me and, in some way, were all there for the same reason as me. I prayed desperately for them, and couldn't even think about myself.