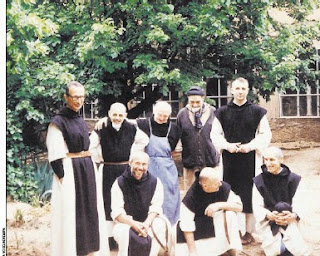 The Martyrs of Atlas
Left to Right Back: Christian, Amedee, Jean Pierre, Luc, Philippe
Front: Christophe, Celestin, Michel
'Let's talk about the cross,' the Sufi said. 'Which one?' I asked him 'The cross of Jesus, obviously.' 'Yes, but which? When you look at the cross, you see an image of Jesus - but how many crosses do you see?' 'Perhaps three, certainly two,' The Sufi replied, thinking a bit. 'There is one in front and one behind.' 'Which one comes from God?' I asked him 'The one in front,' he said. 'Which comes from men?' 'The one behind' 'Which is the oldest?' 'The one in front...God had to create the first one before man could make the second one.' 'What is the meaning of the cross in front, of the man with his arms extended?' 'When I extend my arms,' he said, 'it is for embracing, for loving.' 'And the other?' 'The other cross is an instrument of hatred, for disfiguring love.' 'My Sufi friend had said, 'Perhaps three.' This third cross - isn't it perhaps he and I and this common effort to loosen ourselves from the cross of evil and sin behind, so we can bind ourselves to the cross of love in front?

From a homily for 14th September (The Triumph of the Cross), by Christian de Cherge, Martyr of Atlas

The third cross - the struggle of moving from hatred to love.

Jesus takes up his cross, and invites others to do the same. He invites others to struggle and move hatred to love. Christian de Cherge was a member of the Trappist community in Tibhurine, Algeria. He and 6 of his brethren were kidnapped and killed in the Spring of 1996, pawns in a murky negotiation to free imprisoned terrorists. Brother Christian made his journey from hatred to love through his determination to help Muslims and Christians recognise each others greatness. He completed his mission through his final letter in which he forgives his killer.

Email ThisBlogThis!Share to TwitterShare to FacebookShare to Pinterest
Labels: Second, Stations of the Cross