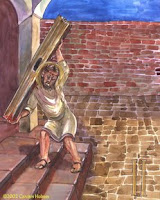 If those who practise the mysticism of the passion were to regard the crucified Christ only as the archetype of their own pain and humiliation, they would indeed be maintaining the memory of his humanity and abasement, and would be making it a present reality in their own consciousness of abasement. But they would then be destroying what is distinctive about the person of Jesus and what is special about his suffering and dying. They would then be understanding his cross only in the general sense of 'cross and misery', as the passive suffering of an uncomprehended fate, like a miscarriage, an illness, a plague, an immature death, or suffering from the deep rooted evil of other people, as social suffering, and suffering from the society which humiliates them. But these would not be the sufferings of Christ. There is no mention in the Gospels of his suffering from nature and fate, and his economic sufferings as a 'carpenter's son'. Rather, his sufferings and humiliation came from his actions, from his preaching of the imminence of the kingdom as a kingdom of unconditional grace, from his freedom towards the law, and from his table fellowship with 'sinners and tax collectors'. Jesus did not suffer passively from the world in which he lived, but incited it against himself by his message and the life he lived. Nor did his crucifixion in Jerusalem come upon him as an act of evil destiny, so that one could speak of heroic failure, as heroes have often failed and yet remained heroes to posterity. According to the gospels, Jesus himself set out for Jerusalem and actively took the expected suffering upon himself. By proclaiming the righteousness of God as the right of those who were rejected and without grace to receive grace, he provoked the hostility of the guardians of the law.


The concept of Jesus taking up his cross has become synonymous with the idea that people should suffer in silence and accept their fate in life. Yet this is, to my mind, a complete injustice to the sacrifice of Christ, who in the taking up of his cross, rebelled against the prevailing authorities because he saw the truth of God's justice and was going to play a vital part in bringing it about.

Jesus chose to take up the cross on our account, no doubt about that. Key to this is that he shoulders his burden to bring peace to others, not to himself. The death he offered was a death of protest against all that is wrong with the world. In modelling ourselves on Christ, and taking up the cross, we are called to protest against that which we still find to be unjust, in our own communities and in communities around the world. This is not submissive, but active suffering. The cross is 'taken up', not passively 'recieved' .
Posted by Cloister

Email ThisBlogThis!Share to TwitterShare to FacebookShare to Pinterest
Labels: Second, Stations of the Cross