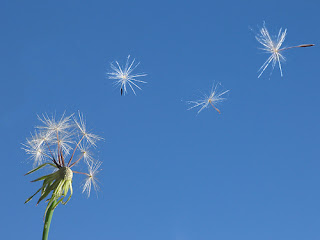 Treasures can be found in the unpublished archives of Roger Deakin. He died, too young, in 2006, and a friend remembers him here. In his work, although I know not his religious views, I frequently find inspiration. He wrote Waterlog, and Wildwood, and Notes from a Walnut Tree. Each work is an intimate relationship with the natural world, with Creation and everything it can teach. The words below are an extract from a poem called 'Blue wind, Blue light'.

'A wind that's already slipped
in and out of several gardens
is churning the blue light of summer
waking sparrow, swift and starling
in my roof - 'Your roof is infested
with birds and mice'
said the chartered surveyor
with no trace of pleasure
at having made
such a discovery'

It reminds me of the quiet work of Pentecost: so dramatic in Acts of the Apostles, so quiet and unobtrusive in real life. The unappreciated awakening, the blue light of dawn, churning, new life and discovery. Demanding, welcome and unwelcome. I love the idea of a 'wind that has already slipped in an out of several gardens'. The Spirit has been moving for generations. There is never a new idea, only the inspiration to carry on, keep going, breathe life into living the Gospel. I also like the idea of being a bird or a mouse awoken to build new things, slowly and gradually, nibbling away with purpose, collecting, forming. The unexpected gentle breeze has, in my experience, formed the rock on which I stand. An onlooker, the chartered surveyor in this case, may well look askance. Sometimes I think myself the onlooker, whilst the Spirit nibbles and gnaws. I am the one who looks askance.

I haven't made anything remarkable lately. I have mostly been trying to see myself through the term, and enjoying students rejoice in their exam leave and the last days of a school career. Of course, I wish upon them the spirit of knowledge, wisdom, courage, understanding and right judgement. But, most of all I wish them the spirit of Wonder and Awe and Reverence: that they may be continually amazed by the life given to us, and they we all may appreciate it. 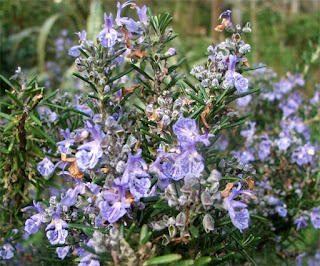 It is May and it is Spring! Hurrah! I have noticed that the Rosemary is in full bloom, and so this week I will make Rosemary potatoes. Ye Olde stories about these ingredients should demonstrate to you why. May is the month of Mary, as well as the Spirit of Pentecost. First the recipe:

Peel and chop into little 1/2 inch cubes some fresh waxy potatoes and place them into a non stick oven dish. Drizzle them liberally with olive oil and season with sea salt and cracked black pepper. Grab a good sized handful of rosemary sprigs. Taking two or three of the sprigs, hold each one upright and run your forefinger and thumb down the central twig to release the leaves. Stir these into the potatoes and tuck the remaining whole sprigs into the dish strategically. Bake in the preheated oven for 45 minutes turning the little gems over frequently until they are golden.

This is a great side dish, it is great at a barbeque, as an alternative to chips, as a snack served in paper cones....anytime really.


Rosemary originated in the Mediterraean, but has now spread to most temperate climates. It holds the ancient Latin name lamiaceae, which means 'sea dew'. You may thing that this is because of the oceanic colour of its' flowers, and perhaps you are right, but there are more entertaining tales to be had about its' foliage. Rumour has it that during their flight into Egypt the Holy Family had cause to hide from some soldiers. Mary threw her cloak over a rosemary bush and knelt behind it with the child, Jesus. When she rose again, in safety, the flowers of the sweet smelling plant miraculously turned from white to blue in her honour.

You might think that one miracle story would be enough for rosemary, but no. The plant is also said to bloom at midnight on Christmas eve (no I have never checked, don't spoil it). It apparently will only grow for 33 years, the age of Christ, and then will wither and die.

Shakespeare's Ophelia famously says 'There's Rosemary, that is for remembrance", and indeed, it used to be common practice for mourners to throw rosemary onto the coffin from the graveside. Strangely, it has also been a traditional plant for the bride to have in her bouquet and is said to bring happiness to the couple. Often grown at the front of the house Rosemary has the reputation of being able to keep spirits, thieves and witches at bay. Medicinally it is a good cure for headaches and, the oil makes both excellent antiseptic and insect repellant. The smell is also said to inspire 'good' thoughts.

In the spirit of Pentecost getting outdoors into the gentle breeze seems the thing to do, a time to admire the spirit brushing round nature in all it's glory. Sure, the rain might be falling, and it is certainly colder than it could be, but time outdoors is precious: too often we are cooped up indoors. The time has come to break free.
Posted by Cloister