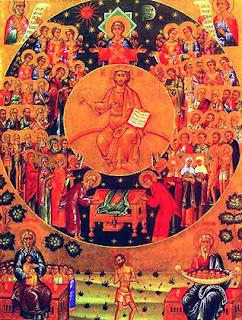 It is time to take the challenge of choosing a Patron Saint for 2013. Last Year I drew St. Ulric of Augsburg, which was rather confusing, as his areas of expertise included protection from birth complications, dizziness, faintness, fever, frenzy, and the infestation of mice and moles! He is also the patron of pregnant women, wanderers, weavers, winegrowers and a happy death. Around the time of his feast I took time to consider how any of that little lot could be relevant to me and concluded that: 'I would love to weave, would do anything to have the opportunity to make wine, and hope one day to have an 'easy birth' or two, or three, or four..... Eventually, with a tribe of family around me, I hope to die a good death, around the age of 99 or so...' Perhaps, this year I have set the foundations for some of that, who knows? I am currently crocheting a blanket...

Choosing a Patron Saint for the year used to be a custom amongst religious communities for New Year's Day, and perhaps, in places it still is.  Modernity has caught up with this ancient practise by means of a Patron Saint Generator by Jennifer Fulweiler.

St Faustina, of Divine Mercy fame, shows that this custom was alive and well in the 1930's with an excerpt from her diary:

“There is a custom among us of drawing by lot, on New Year’s Day, special Patrons for ourselves for the whole year. In the morning, during meditation, there arose within me a secret desire that the Eucharistic Jesus be my special Patron for this year also, as in the past. But, hiding this desire from my Beloved, I spoke to Him about everything else but that. When we came to refectory for breakfast, we blessed ourselves and began drawing our patrons. When I approached the holy cards on which the names of the patrons were written, without hesitation I took one, but I didn’t read the name immediately as I wanted to mortify myself for a few minutes. Suddenly, I heard a voice in my soul: ‘I am your patron. Read.’ I looked at once at the inscription and read, ‘Patron for the Year 1935 – the Most Blessed Eucharist.’ My heart leapt with joy, and I slipped quietly away from the sisters and went for a short visit before the Blessed Sacrament,where I poured out my heart. But Jesus sweetly admonished me that I should be at that moment together with the sisters. I went immediately in obedience to the rule.”

Excerpt from “Divine Mercy in My Soul, the Diary of St. Faustina”

The ways of the future are unknown, but this year the patron chosen for me is St. John of God, whose feast falls on 8th March. His patronage is listed as follows: Against Alcoholism; Against Sickness; Alcoholics; Booksellers; Dying People; Firefighters; Heart Patients; Hospitals; Nurses; Publishers; Printers; Sick People.

I'll write more about him in time, and invoke his intercession throughout the year.

Let me know, via comments or via Facebook, who is chosen for you and their feast day, and I'll be sure to write a little something for you during the year.

So far: Elizabeth Ann Seton, Clare of Assisi, Anthony the Abbot....Come on! Choose yours!

Thank you for a great resource! Nicholas of Tolentino for me: animals, boatmen, souls in Purgatory etc.! Happy and blessed New Year to You"

... Should have said in my previous comment, his feast day is 10 September. And thanks for your blog, which I've only just discovered. You're welcome to come over and see mine at www.antoniasferverino.blogspot.com - if this isn't too blatant a piece of self-advertisement. If so I apologise! :-)