No sooner had Andrew found Jesus than he ran off and found his brother to tell him (John 1: 40 - 43). Andrew is the epitome of that first human response to news. Everyone else heard, they saw, they observed. Andrew gave the first response: tell someone else; tell everyone, follow him. Andrew, patron saint of Scotland, has his feast at the very end of the year, or at the very beginning - depending on how the Advent falls. He ties up the ends, and begins the journey anew. Preaching. That's what he does. 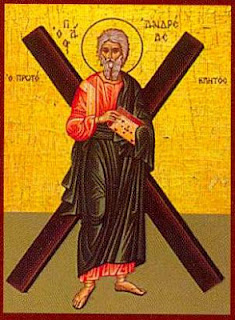 Sometimes I get asked why I bother with religion. It seems such a hassle sometimes. My answer is very simple. I bother with religion because I am interested in what is true about the world, and I am interested in talking to others about what I find, what they find, and what can be found. Andrew is the Patron of all that. He found someone True, and he followed, and he called others to follow.

This year Andrew is the last of the Feasts of friends of mine who, way back at the beginning of the year, chose patrons from a random saint generator. For this reason, he has been among the saints whose intercession I have called upon to look after those I love.

Thinking about truth and those I love brings me to an odd juxtaposition of thoughts. Ernest Hemingway once said that to be happy as a writer: 'All you have to do is write one true sentence. Write the truest sentence you know.'

My friend, who drew the Patron of Saint Andrew, I know best only through the quality of his preaching. I know he loves words and language because I have heard it, and listened. It is only fair and just then, that I share some things I have recognised as true in his voice when he speaks the Gospel. My prayer would be that he continues to preach as he always has, in the light of God's complete love for His creation, his love for people, and in his love for the Word.

Raimond Gaita, the Australian philosopher, argues that we only see someone as they really are when we see them in the light of those who love them. The same is true of all things, we only really appreciate their value when we see for ourselves the passion they can excite in others. Timothy Radcliffe OP associates truthfulness with language that helps people to flourish, develop and grow; falsehood with words that belittle, denigrate and undermine. Truthfulness is speaking in the light of love, desiring the good of another. That is right. True sentences give something of oneself, and they appreciate the goodness of another. Language is not an individual phenomenon, it belongs to the community, and not to the individual. Herbert McCabe OP said that. People are born into language, they have to learn to use it, and continue learning its nuances all their life.  The words we use depend upon our relationships with those to whom we speak.

I made Andrew a ginger cake once, and that was tasty. This time round though, I think that I will make him something new. I have a glut of lemons, following a round of Limoncello preparation for Christmas. 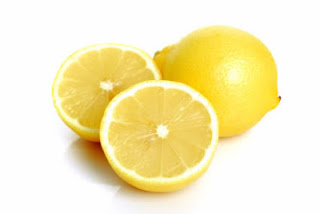 Preheat the oven to 180C. Grease and line a 2lb loaf tin with baking parchment. In a large bowl, beat together the butter and caster sugar until it is pale and fluffy - about 5 mins of electric whisking. Gradually beat in the eggs, followed by the finely grated zest of 2 lemons and the juice of 1/2 a lemon. Fold the flour and ground almonds into the butter mixture, then spoon into the prepared mixture into the tin. Bake for 30 - 40 minutes or until a knife inserted into the tin comes out clean. Cool in the tin for ten minutes, then invert the cake onto a cooling rack, and leave it until warm to the touch. Meanwhile, put the juice of 1 and 1/2 lemons and the pared zest of 1 lemon into a bowl with the sugar cubes. Use the back of the spoon to roughly crush the mix. Spoon this over the warm cake and leave it to cool.

At the moment, I have a glut of lemons. So, yesterday, I made lemon curd. You could be adventurous and spoon lemon curd into the middle of the cake mixture, along the length of the loaf tin, when you are half way through pouring the mixture into the tin. This will mean you end up with a lemon drizzle cake with a gloopy lemon curd centre. It is yummy, but not for those who do not like to get sticky! First response? Pass a napkin!
Posted by Cloister