The return of a tricky customer, and welcome wind and rain.

Is it just me that is always going to associate Blessed John Henry Newman with the changing of the seasons? I remember sitting outdoors at 4am on a September morning, dressed in waterproofs, holding a warm cup of hot tea and waiting, waiting, waiting for Benedict XVI to proclaim John Henry Newman 'Blessed'. I was with my Ma, who taught Newman on the Leaving Certificate Syllabus in Dublin for 20 years, and spent another 20 teaching in his school, Cardinal Newman, in Luton. If you say Newman to my Ma, she will start reciting she knows his work so well. Despite the family memories it was the rain that caught my attention, the driving rain. It stopped the moment the Mass began.
Of course, it was raining the night Fr. Dominic, the Passionist who received Newman into the Church, came calling at Littlemore. Fr. Dominic arrived soaked and dried himself in front of the fire.
And, it was raining last year, when on the first feast of Blessed John Henry Newman, the 9th October, I wandered down to the Oxford Oratory to walk to Littlemore for the first time. It didn't rain for the walk though, for which I am grateful. 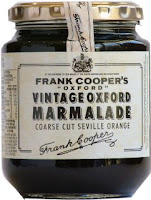 This year, I am likely to be outdoors and in the rain once again. I am going camping with some students from school who are completing their Duke of Edinburgh Award. We will have a fire, no doubt. And, I will be called upon to lead night prayer around the camp. There are many choices I could have made about a food for Newman's Feast Day, and many I would have made under different circumstances. But, as it is, I am reminded of something I wrote last year when first choosing for a tricky customer:


Whatever is chosen, I think, it has to be something you would look forward to if, having walked for miles in the cold, dark rain, you entered a room with a blazing fire, an armchair and an ambition to talk far into the night with a warm hearted friend.

I commend to you, fresh bread toasted over a fire, and lashings of butter and Vintage Oxford Marmalade. Bring out the sweet tea, we celebrate an English saint (to be). That, in the park with many teenagers, is what my Feast will be, and no doubt we will reflect on it in our morning prayer of Sunday. 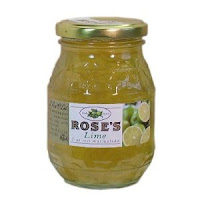 Limes, of course, were being imported into Edgebaston for the first time just as Newman was setting up his Birmingham Oratory on the site of an old gin factory. I shan't recommend Gin for today, no not even Gordon's. I can't imagine John  Henry would approve. However, do you remember Roses Lime Marmalade? That could be the way to go.


If you have the time, you could make the bread, and cover it with marmalade fresh from the oven *faints in happiness at the thought*. Here is Hugh Fearnley Whittingstall's recipe to help with that. It is ace, and has never been known to fail..


500g plain flour
2 tsp bicarbonate of soda
1 tsp fine sea salt
Approx 400ml buttermilk or live yoghurt (you can buy this from Waitrose, or make it)
A little milk, if necessary

Sift the flour and bicarbonate of soda into a large mixing bowl and stir in the salt. Make a well in the centre and pour in the buttermilk, stirring as you go. If necessary, add a tablespoon or two of milk to bring the mixture together; it should form a soft dough, just this side of sticky.


Tip it out on to a lightly floured work surface and knead lightly for about a minute, just long enough to pull it together into a loose ball but no longer - you need to get it into the oven while the bicarb is still doing its stuff. You're not looking for the kind of smooth, elastic dough you'd get with a yeast-based bread. 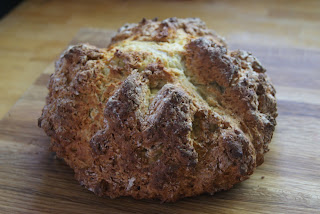 Put the round of dough on a lightly floured baking sheet and dust generously with flour. Mark a deep cross in it with a sharp, serrated knife, cutting about two-thirds of the way through the loaf. Put it in an oven preheated to 200°C/Gas Mark 6 and bake for 40-45 minutes, until the loaf sounds hollow when tapped underneath.

Cool on a wire rack if you like a crunchy crust, or wrap in a clean tea towel if you prefer a soft crust.  For today, you can choose, eat it warm straight from the oven, smothered in salty butter and Frank Coopers Oxford Vintage Marmalade or Roses Lime Marmalade,  or,  it makes great toast if you leave it overnight.
Posted by Cloister

Hello! I've just read your latest posting (featuring 2 of my favourite things: roses marmalade and great bread) and so I thought I'd send you a thank you email to say that I'm enjoying your blog very much.

I found it quite by chance, as I was search the web for pictures of the Sacred Heart, and I've returned every few days to read and learn more about the saint which fit into your daily life so seamlessly, to the point where I celebrated the feasts of St Michael, St Gabriel, St. Raphael and All Angels for the first time this year.

While I'm not catholic I believe in the power, help and guidance that Saints provide.

In closing, I thought that I'd mention that I'm writing this while lazing on the couch in my living room, with this message coming to you all the way from Cape Town, South Africa. (-:

Thanks again for sharing your experiences.