Cast a cold eye on life, on death. Horseman pass by!
WB Yeats
Walking from the Great Hall in the British Museum into the dark hallows of the 'Treasures of Heaven' exhibition a hush descends as if you have just stepped into a sacred space. In many ways, you have. The British Museum have begged and borrowed a remarkable and beautiful collection of reliquaries and relics, and aims to present them with some explanation as to their use in devotion in Medieval Europe. There is no doubt that the exhibition has been prepared with respect and care. And, it is beautiful. But, for me, standing before the reliquary of the 'Man of Sorrows', which still contained the relics of many holy men and women who had gone before, I could not help but feel that the icon was 'lost'. The chattering classes, in which I played a part, stood before the images and made appreciative comments about the artistry and craftsmanship of the 'object' created in 1300AD. I was uneasy. Before me was something created out of love, from love, for love. It was created to be looked upon with love, and to allow love to into the hearts of those who looked upon it. Yet, the environment in which it stood invited critique more than introspection - a cold eye. 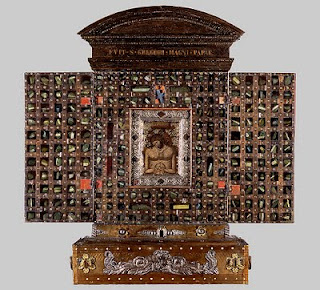 Venerating relics of the saints is not the same as holding onto old photographs of loved ones, making a trip to see the desk Marx wrote on, or heading off to visit Elvis' homeland - as was implied by the video which bid adieu to visitors. Relics illustrate in the most powerful way, that there exists a Goodness worth seeking; a Goodness worth giving your life for. They are a promise that such Goodness is eternal. The communion of saints continually intercedes for people during their pilgrimage on earth. The veneration of relics is a visceral education: the veil between this world and the next is thin, at times transparent; it is made from delicate echoes of love: to look upon it is to look with devotion. Those bits of bone and hair were people that lived lives full of all the dilemmas and frustrations of every human life. And, during their time here, they sought only that Goodness and Love shown in the Gospel images that decorate each reliquary. They live on still, in eternity, praying for those still journeying on the pilgrim way. In many ways analysis is a misplaced response to such emotive and emotional objects.
Maybe it is not an accident these relics are no longer in Churches, but have migrated to the museums. More people certainly get to look and wonder.  As, WB Yeats says, 'The world is full of magic things, patiently waiting for our senses to grow sharper'.
In order to seem as respectful as is possible, the exhibition aimed for an atmosphere of sanctity. So much so, that Jonathan Jones at the Guardian felt a key aspect of pilgrimage - the rough vulgarities of Chaucer's Canterbury Tales - had been missed out. I laughed when I read this. It is true - the exhibition has been designed not to offend practising Christians,  and I thank the British Museum for that. However, I have made many pilgrimages with different people, and can recall no adventure in which there were no scandals, laughs, drinks, jokes and general merriment - that is part of walking with others, and part of pilgrimage. I know no pilgrim who would say pilgrimage is all piety and prayer, or that prayer does not involve laughter! The comments on Jonathan's post rightly point out that the purpose of the exhibition was to show the craftsmanship of the reliquaries and explore the devotional practises associated with relics. As I have observed above, relics, reliquaries and pilgrimages to visit them are about love. Although I might be able to imagine an exhibition about marital love which looked only at how couples are portrayed in art, I would never imagine this illustrated all of married life!
Anyhow, final thought? I did not want to cast a cold eye on the life and death of the saints, their relics and the reliquaries crafted to display them. I wanted to cast a loving eye, an inquisitive and curious eye, and an eye of devotion. To that end, I agree with my sister Gemma, who wished there was more about the saints and and the lives their lived, why they did what they did, and how and why they died.
Posted by Cloister

Email ThisBlogThis!Share to TwitterShare to FacebookShare to Pinterest
Labels: Faith, Other

I remember an Evangelical friend of mine dismissively referring to the parish church building (once Catholic, currently in the hands of Anglicans) as 'the museum'. By the grace of God Catholicism gives us a living connection with the past. May these precious objects soon return to Churches, where they can be properly venerated, and nourish the living faith of the devout.