The start of a journey... 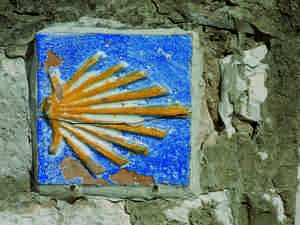 On this day in 2003 I arrived in Santiago de Compostela, having walked mostly alone, but sometimes with others I met on route, from St. Jean Pied la Port. I was tired and elated. One of the first things you become aware of when you start exploring Santiago - the Cathedral, the shops, the city - is how light you feel. I could have flown, run or danced anywhere, which was quite surprising considering the distance I had come. This amazing lightness has, of course, a practical as well as a spiritual source. For the first time since the 1st June, when I set out across the mountains, I had put my rucsac down, left it in a hotel and set out to look around without it. In addition to that, having come so far looking for something, the feeling of having arrived brought immense relief. I was home at last. The only thing I have experienced that comes close to feeling that light is the first moment you jump to take off when diving from a 10 metre board. It was as if I had no weight. I was pleasantly surprised this morning then, that Matthew recording Jesus' saying 'My yoke is easy, and my burden is light' was the reading of the day. It seemed beautifully fitting somehow.

Completing the journey, in the dim half light of the Cathedral was memorable. As it was a Thursday, there were not as many people as there might have been, but a queue still formed approaching the tomb of St. James. It was silent in that place. The pilgrim mass, celebrated with the huge botafumeiro, would not be until the Sunday. In the meantime, the dark Cathedral was mine to explore, think in and pray in. It was in those days I realised that the journey had only just begun.

I came home from Spain, having been hanging out in Salamanca since the previous November, or thereabouts, and trained to be a teacher. Teaching and education has been my life ever since. I still wear a leather band around my right wrist to remind me that one day, I have to go back. The original was given to me by a pious tramp at the door of the cathedral. He said, in a spanish drawl possibly under the influence of drink or drugs, 'you will never forget this place, and this place will never forget you.' On that point, he was right. He tied the band round my wrist. Over the years, it fell off, but I have periodically bought myself a similar replacement. I have a feeling I'll always be wanting to go back to Santiago. In celebration of an unforgettable day: Tarta de Santiago

Preheat the oven to 180C. Grease a large round, loose bottomed cake tin with butter. If it has frilled edges, all the better. Beat the eggs with the sugar in a bowl until they are pale and fluffy, then add the flour, sieved, softened/melted butter and 250ml / 8floz of water. Mix well, then stir in the ground almonds and the lemon rind. Pour the mixture into the prepared tin and bake for about 30 minutes, until cooked through. Insert a wooden cocktail stick into the centre of the cake, it is cooked through if it comes out clean. Remove from the oven and leave to cool, then turn it out of the tin. Sprinkle with icing sugar. As is traditional, I usually cut the sword symbol of St. James from cardboard.

I love this with milky coffee, or, if later in the day, a glass of deep red wine.
Posted by Cloister

have you taken this book?