I didn't know how much the life of Damien de Veuster had affected mine until I saw his portrait hanging above where I was stood in the underground basilica of Lourdes. I wasn't there with Damien's congregation, the SSCC, I was there with the Dominicans, but it was the SSCC that had brought me there. There is little doubt about that.

I was brought up and developed my faith amongst the SSCC, and the stories of Damien. I traveled to France, Spain, Poland and Ireland with the SSCC as a teenager and young adult. I walked around the pilgrimage sites of the North East with them; York, Newcastle and Lindisfarne. My Bible, my love and treasure, is covered in teenage stickers which commemorate these events.

It was Lourdes that brought the influence of this man home. I was excited to see his image, it had hung around my neck for so long as a teenager. Now, there he was hanging above my head in the underground basilica. For the people I was with, however, he was a stranger; I had to explain. This was the man, born with the name Joseph, who became Damien. He dedicated his life to working with the lepers of Molokai. His story is bound up with the evils of history, the slave trade and the transmission of western illnesses to other populations. Damien fought to be allowed to be a minister on the island to which lepers were sent to die; the living cemetery. Leprosy was one of many diseases which wrecked the Haiwiian Islands, the worst. To stop it spreading people were condemned to die; they were made less than human. Damien worked tirelessly to show that was unjust. The sick need care, compassion and understanding, not fear and misapprehension. Lourdes is a powerful place to learn this lesson. Explaining the life story of a witness to this truth makes this ever more powerful. I half expected one of my old friends from the SSCC to walk around the corner at any moment. 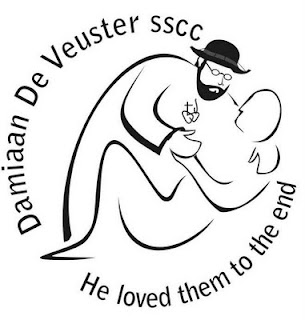 Damien went to the leper colony of Molokai, which was created out of fear and hate, to bring healing and love to those who were exiled there. The ships which brought people to the island stopped far out, requiring the passengers to swim the final distance to to the shore. They were so afraid of the lepers. Damien witnessed to the humanity of those who suffered, he tended to their wounds, built homes, schools and a church. He turned Molokai from Hell to Human, and for that he deserves his place in heaven. Damien was beatified in 1994; I was in Year 10 at school, but I remember people going from the Parish. He was made a Saint, Canonised,  in February 2009.
"Not without fear and loathing," Pope Benedict said in his homily for the day, "Father Damian made the choice to go on the island of Molokai in the service of lepers who were there, abandoned by all. So he exposed himself to the disease of which they suffered. With them he felt at home. The servant of the Word became a suffering servant, leper with the lepers, during the last four years of his life." Damien contracted leprosy and, eventually, died of the illness.

Today, Damien's symbols are a tree and a dove. In Saint Damien's role as the unofficial patron of those with HIV and AIDS, the world's only Roman Catholic memorial chapel to those who have died of this disease, at the Église Saint-Pierre-Apôtre in Montreal, Quebec, is consecrated to him. It seems to me that this is an appropriate memorial for a saint who spent his life drawing attention to a disease that no one wanted to look at and everyone wanted to blame on someone else.

Becoming aware of how people need care amidst illness is a gift and a grace. It is something I hope to grow in day by day. :)