Well, it was true last year - and we wait in expectation to see what will happen in 2010. This year has been a bumper harvest for nuts and berries of all sorts. One look round the fields near me and you can see the blackberries, although they came early and bitter, have settled into a ripe, juicy, bumper crop. The cobnuts, for the more observant among you, were ready by 'Nutting Day', 3rd September. This used to be a traditional school holiday to allow families to collect nuts for the winter. But woe betide anyone in these parts who headed out to collect them on 21st September, Devil's Nutting Day. I have no idea where that tradition comes from. The walnut tree in the garden has only just begun to shed its harvest, and the acorns similarly seem to have ripened this week. And, the Michaelmas daisy (pictured below) is in full flower in the garden. :)
Anyhow, today I have been making orange and hazelnut cake - the traditional teatime snack for the Feast of Michaelmas, okay....The Feast of Saints Michael, Gabriel and Raphael, and all angels. The others do seem to get a bit left out. I thought I would share the recipe, and when the finished cake is out of the oven, maybe a picture.
Warning, I am stubbornly imperial. 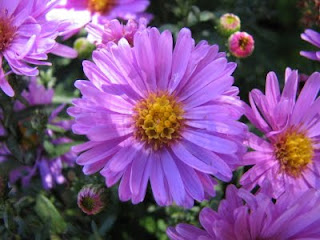 6oz soft butter
3 eggs
4oz wholemeal self raising flour
1 1/2 teaspoons mixed spice
1 1/2 teaspoons baking powder
4oz self raising flour (white)
5oz soft brown sugar
8oz hazelnuts, toasted then crushed
grated rind of 2 oranges, the juice of 3
Beat the butter and the sugar together until light and fluffy. Add the eggs a little at a time and beat well in between. Fold in the flours, baking powder and mixed spice - sieved together. Toast the hazelnuts and then beat them up with a rolling pin. Add them to the mixture. Grate the rind of two oranges, throw that in, and then juice those oranges and another. Mix in the juice.
Pour the mixture into a lined and greased 7inch baking tin, smoothing the top. Bake in a pre heated oven at 180 degrees celsius for about and hour and a quarter. Remove from the oven and allow to cool. Turn out.
It is traditional to decorate this cake with marzipan leaves around the outside. To do this wait until the cake is completely cool. Roll out your marzipan and get arty making leaves, or nature orientated designs. Thinly spread apricot jam around the cake where you would like to stick your marzipan artwork, and then stick them on. Marizpan fruits are traditional for the top of the cake - a centre piece, but who am I to dictate your creativity? If you are a Michael Angleo in the kitchen make an angel, I double dare you. For me, I like to put the marzipan-ed cake under a hot grill for a few moments to give to some colour. Or, if you are lucky enough to have a blow torch for the kitchen, get happy! ( I really want one of those).
The promised picture: 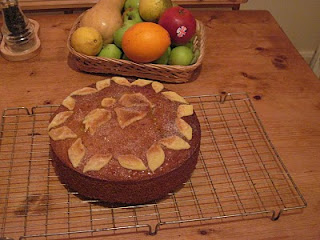 Just so you know, other traditional foods for today are goose, all things spicey, such as cloves, cinnamon and ginger, apple and blackberry cake or crumble, roasted beetroots served with fresh cream and toasted nuts, lambs liver, and treacle and toffee!
Errrr....not together, obviously.
Posted by Cloister

Email ThisBlogThis!Share to TwitterShare to FacebookShare to Pinterest
Labels: food, Other

Now where did I see that receipt for Spiced Roast Goose . . ?

Ah . . . hold on; if I go loking for it, she'll have eaten the cake. Perhaps I invite her round to look for it in my collection, and hope I can sneak off with the cake in the meantime !