Cordoba - A house of prayer for all nations

The strict boundaries between inside and outside seem not to exist in traditional moorish architecture. The prayer space of the mesquita of Cordoba would have once blurred with the 'patio de los naranjas', a classical abloutions court where the faithful prepared for prayer. All 19 naves, once open onto the courtyard, would have shed brilliant shafts of sunlight onto the majestic columns which continued the linear pattern of fruit trees, drawing them into the mosque. 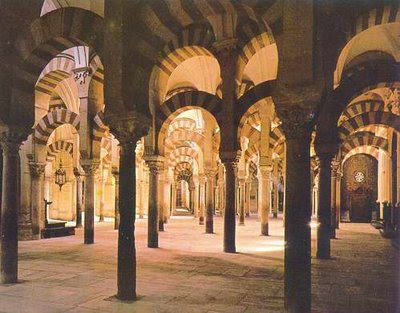 Today, the cathedral exists in a mysterious half light; it is so awe inspiringly beautiful it could make you cry. The pillars create a forest to be explored. Inside each of the naves are tiny side chapels, each dedicated to particular saints and filled with religious ornaments, paintings and peculiar pieces of renaissance furniture. History is here; the brokenness of humanity is in every brick. The mosque was begun upon the ruins of San Vincente, a visigothic construction, in 785 under the direction of Abd-ar-Rahman I. Three further muslim architects would envision and complete the work upon what was to be considered the most important sanctuary of Western Islam.
King Ferdinand III reconquered Cordoba in 1236 and the mesquita became Cathedral. It was not until 1523 however, that the Cathedral Coro was begun. Its construction came about amid a sea of controversy since the ingenious architecture of the mosque was easily recognised by all. Carlos V, who sanctioned the work, repented afterwards, saying: '

You have built here what you or others might have built anywhere, but you have destroyed something that was unique to the world.'

The coro stands unrepentant in the middle of the sea of columns, blocking what must have once been a clear view from the 'patio de los naranjas' to the mihrab on the far Eastern wall. It is the contrast between simplicity and detail which strikes you first. The features of the mesquita are clean, focused and simple; against it the renaissance detail and gold is an overpowering distraction. Under the canopy of pillars I felt free to reflect upon the greatness of God, but in the coro I was led to more mundane thoughts, such as; 'where did they get that gold?' 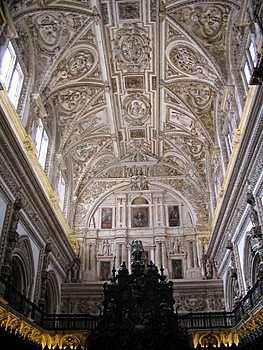 There was one chapel which was beautiful in its conception and execution. The Blessed Sacrament chapel, at the heart of the cathedral, was set apart from the coro, I think due to restoration works which were taking place. It was in the majestic forest of stone, facing up towards the eastern walls. The Blessed Sacrament was presented simply, humbly with a crucifix and sanctuary lamp. I liked it there. It was possible to think about all the people who has used this place as a space for prayer. I could not sense the obvious divisions and struggles for power that dominated the rest of the building. The confusing thing about Cordoba is, I am not quite sure what God would make of it. In the simplicity of a quiet corner of devotion, it was possible to see that the history of bitterness, power and division over religion really was not 'The Plan'.
There are more pictures to follow: I am waiting on Gemma!!!!
Posted by Cloister

Email ThisBlogThis!Share to TwitterShare to FacebookShare to Pinterest
Labels: Faith, Other