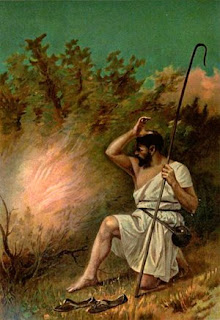 Okay, so don't answer that too quickly.
I just watched a programme on BBC with the self same title. It was about spirituality, religious belief and mental health. Dr. Byron, presenting the programme, was investigating the line between claiming to have a personal relationship with God, and hearing voices. She wished to know if there were a difference between the two, and asked why society found the first to be acceptable, but rejected people who found themselves in the second category as mentally ill.
So, for a programme presented from the secular outlook 'Am I Normal?' was surprisingly balanced. Dr. Byron visited a clinic in which people who heard voices explained to scientists how they experienced their self contained conversations. This aspect was very enlightening indeed, and it showed how many patients have suffered under the label 'mentally ill', where in previous lives they would have been accepted as entirely normal. Dr Byron also visited the Carmelite Monastery in Notting Hill and spoke with the Prioress. Byron explained that if she were come across a patient, in her career as a clinical psychologist, who had shut herself away from the world, rarely spoke and claimed to have a personal relationship to the divine, she would probably diagnose depression. The Prioress explained that the only life worthy of all her energy was one which was devoted to the ultimate, to God. Then, there was an american neurologist who proved that a Pastor speaking in tongues did not access the part of his brain normally responsible for language, and the feeling of being in control.
There was, however, something about the programme which bothered me. It was the assumption from some of the commentators that believing in God, and organizing your life around a religious belief system was the 'easy option', and that coping in the big wide world without God required 'mental agility' beyond the capacities for the religious. Just where does the secular world get the idea that believing in God is easy, or that faith comes without a struggle? The Carmelite Prioress even hinted at the challenge which faith presents when she spoke about her own doubts after she first joined the Order: 'There was a voice mocking me which said, 'What if it is all not true? You are going to look such a fool', she explained. Asked what she said in response to this voice she replied: 'Then I will be a fool then. I am going to be a Carmelite. Coming to this monastery was a choice, it was my choice.'
Dr Byron was amazed that faith did not seek after evidence. She maintained that a scientific view would suggest that because God cannot be proved, we should not assume to 'know' something about his existence. A Carmelite sister of her own age explained that the difference between 'knowing' in your head and 'knowing' in your heart are different and distinct. I liked Dr. Byron. She seemed to be genuinely thinking about what she was investigating about 'hearing voices', but I did think that if she were to start listening to the heart of 'religious thinking' then there was a need to stop thinking that a religious worldview is the 'soft option'. Byron concluded by suggesting that hearing voices, and believing that your life guided by God could well be linked, and both were integral to the human condition. But, she thought, it was dangerous if people actually took what they 'heard' or 'believed' and did something about it. So, everyone - stop acting now! This, I thought was a very odd, and for a scientist, rather illogical ending.
Posted by Cloister

Well, in that case, very happy to be abnormal then!